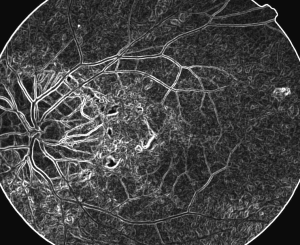 To evaluate the short-term efficacy and safety of intravitreal bevacizumab for the treatment of retinal angiomatous proliferation.

The 12-month results of intravitreal bevacizumab for retinal angiomatous proliferation are very promising with no apparent short-term safety concerns. Treated eyes had a significant functional and anatomical improvement. Further studies will be needed to better determine long-term efficacy and safety.